It seems every blogger has a striped shirt. (Guilty as charged, I just bought this navy and white one from the Gap.) Put those stripes to work as a pirate. Add a bandanna, glittery scarf, eye patch, or sword and you’re golden.

Other easy costumes straight from your closet include a cowboy/cowgirl. Lasso a straw hat, plaid or gingham shirt, and some denim. Sheriff star and toy guns are optional.

I’ve also been a spy at the last minute. Sneak around with black sunglasses, trench coat, and a briefcase.

We have clever friends that were smores one year. She wore all white as the marshmallow. He wore all brown as the chocolate. Both had a square of cardboard strapped to their back as a graham cracker. 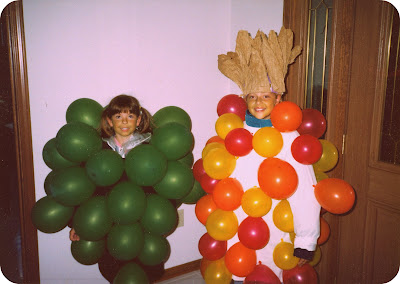 One of my favorite costumes from growing up is the Indian corn and my sister’s bunch of grapes. This was also perfect for wearing over a winter jacket when the weather was chilly for trick or treating. Simply pin balloons to an oversized shirt. My Mom then painted our faces to look like the stem of the grapes or the dried leaves of the corn.

If you’re a little pressed for time to DIY a costume, you can always pick one up at Target or the like.﻿ I was a Joann Fabrics over the weekend and their Halloween costumes were already marked down.
And yes, I will milk my running hot dog costume for all it’s worth :) It was marked full priced when I looked at it, but I asked for a discount because it was slightly damaged. Its main purpose was for the Halloween 10K, so I didn’t care if the velcro needed to be restitched. So if you’re handy with a needle and thread, don’t be afraid to ask for a discount.

On the other extreme, John decided to invest in this chicken costume, fondly referred to as the “Chilliken.” $80 (including tax and shipping) isn’t cheap, but he’s used this costume for years. And multiple times a year while at SLU.

Fun fact: The Chilliken even made a brief appearance at our wedding. You guessed it. We’re dancing “The Chicken Dance.”

Jessica of “What I Wore” always has fantastic Halloween ideas. Here are this year’s costumes. Some are easy and pulled from your closet, while others take a little more skill to DIY.

Hi! I'm Cathy, an accountant and lover of cupcakes, running, nesting, and my family. This blog was born out of my Midwest sensibilities, the thrill of a good bargain, and helping others. More…